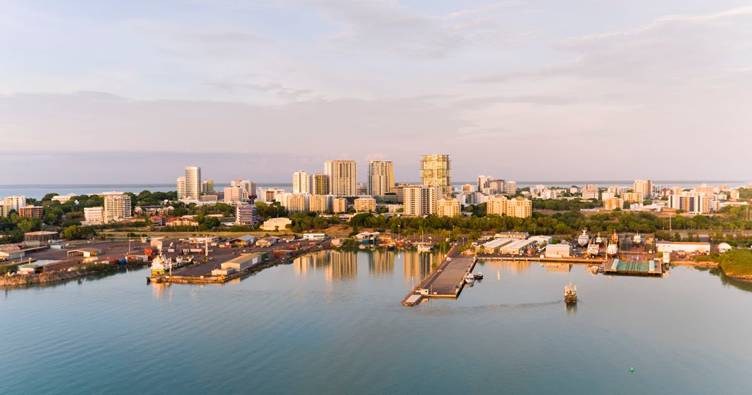 Darwin is the capital city of the Northern Territory, Australia. With a 2019 estimated population of 147,255, it has more residents than the rest of the sparsely populated Northern Territory. It is the smallest, wettest, and most northerly of the Australian capital cities and serves as the Top End's regional centre.

Darwin's proximity to Southeast Asia makes it a link between Australia and countries such as Indonesia and East Timor. The Stuart Highway begins in Darwin, extends southerly across central Australia through Tennant Creek and Alice Springs, concluding in Port Augusta, South Australia. The city is built upon a low bluff overlooking the harbour. Its suburbs begin at Lee Point in the north and stretch to Berrimah in the east. Past Berrimah, the Stuart Highway goes on to Darwin's satellite city Palmerston and its suburbs.

The Darwin region, like much of the Top End, experiences a tropical climate with a wet and dry season. A period known locally as "the build up" leading up to Darwin's wet season sees temperature and humidity increase. Darwin's wet season typically arrives in late November to early December and brings with it heavy monsoonal downpours, spectacular lightning displays, and increased cyclone activity. During the dry season, the city has clear skies and mild sea breezes from the harbour.

Darwin in the Top End of the Northern Territory has two distinct seasons, the 'wet' and the 'dry'. Plan ahead with this information on temperature and rainfall.

The wet season (November – April)
The wet season in Darwin is characterised by high humidity, monsoonal rains and storms. Average temperatures range from 24.7 - 32 °C (76.5 - 89.6°F), and humidity can push past 80 per cent. The average annual rainfall is 1727.3 mm (68 inches) and January is the wettest month. Despite this, January and February is considered by many as the most beautiful time of year in the Top End. Sunny days and afternoon storms refresh the landscape, and animals and plants flourish.

October to December is the season of spectacular lightning storms, an event eagerly awaited by locals who watch the show from beachside restaurants and bars.

Relatively cool weather arrives in May, and until July, nights are crisp with temperatures ranging from 17 - 23 °C (62.6 - 73.4°F). It is also the perfect time to explore the more remote areas of the region that can be off-limits during the wet season.